You win some, lose some. We usually have the answer as to why our performance was what it was each time. Undertrained, Overtrained, Not enough sleep, or Too much beer.

Yet when we spend many weeks preparing carefully and precisely we can still not know until race day how it will exactly play out, China racing is a gamble. Variables such as sickness, bad course marking, punctures, bad teamwork will affect the result.

As per last post, this series in September was the most important of 2016 team racing. But again we were hit by the bad luck stick, right when we were fired up, in the lead, on Day 2 of the Wulong Mountain Quest (Stage Adventure Racing World Champs) and nearing the finish of the stage, an incident occurred. It happened in an incredibly short space of time but brought implications that would last indefinitely longer. 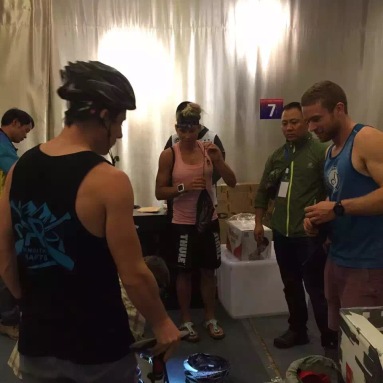 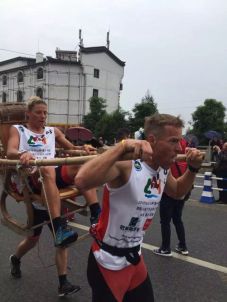 I can still visualise clearly, we were on the mountain bike section, only 2kms into it but we had been in the lead that day for nearly 4.5 hours, and therefore pumping with focused adrenaline. It was a gloomy day with light rain, all surrounding environment glistened in its wetness. We had approached a long downhill stretch of 4wd road that was layered with chunky sharp rocks the size of hockey balls. Hamish was in the front because he loves to go fast down the hills, and he rightly has the skills to do so. What made me remember the high speed the most though was that Simone followed Hamish and was pinning it at an equal speed, this inspired me as normally she is more conservative and obviously was in the right headspace to match the lead pace. We were spread out to create space for safety, wind ripping and whipping through our race bibs, switching from side to side of the road to avoid potholes, ruts and other obstacles, every second counts, using the brakes is wasted energy. We were going fast and I was feeling happy and proud of how our team was doing altogether.

But then Hamish was suddenly on the ground, Simone yelled out something and all I saw was him lying on the ground on his back, middle of the road with his bike nearby.

He wasn’t saying anything and was somewhat motionless except for his chest rising and falling fast, along with a twisted expression on his face.

DRSABC was my first thought, and tried to get him to talk to me, get some response and find out what bits he’d damaged. ‘Talk to me mate!’ ‘Can you hear me?’ ‘Say something!’ ‘What hurts?!’. It turned out he was super winded and couldn’t catch his breath.

We didn’t know why he’d crashed but we saw a clean snap in his handle bars. There was blood oozing everywhere and he wanted to get moving again which we uneasily supported, until Marcel spotted the thick piece of skin hanging off his right forearm which had taken the majority of the impact. Duct tape. He hopped onto Marcels bike and coasted the downhill, Simone supervised while Marcel and I looked for options on fixing the handle bars. I spent a few minutes in the bushes while he rode it downhill. No luck. 200m later I searched again. No luck. We discussed more ideas and then I chased down Hamish to get some cable ties off Marcel’s bike. Then I found the perfect sized stick. Leant it against my pedal spindle, snapped it in half, jammed the stick into the hollow opening of the broken bars and jammed the other broken piece over the stick. It was an stable interference fit. Every single bump that shook though Hamish looked to be extremely painful and I think his body was in shock for a long time.

Read the rest of the day and details from Hamish’s perspective here: www.hamishfleming.com.

Basically it was bad, real bad. Despite optimistically preparing all the boxes and gear for the next day of racing, at approx 2mins until the bus was scheduled to leave for the start line of day 3 we pulled the pin and withdrew from the main event and switch our racing minds off. We were all pretty gutted, we were going so well, Hamish was incredibly strong and we knew the team would had produced an excellent result. But now it was time to care for our team mate who was in the most difficult situation of all. We wanted him to get better, to stop feeling the pain, and get him the best healthcare possible. The team bond was a strong as ever and we dealt with the situation really well. 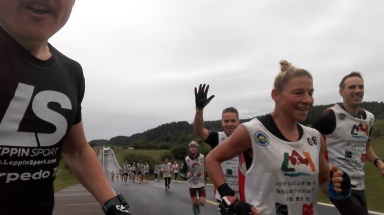 Me and Simone raced the last day of Wulong casually to keep ourselves entertained:

We spent the last 5 days in one of China’s largest cities, Chongqing, so we had access to the best hospital treatment before the next event. Here’s some photo’s from Chongqing hospitals and city life: 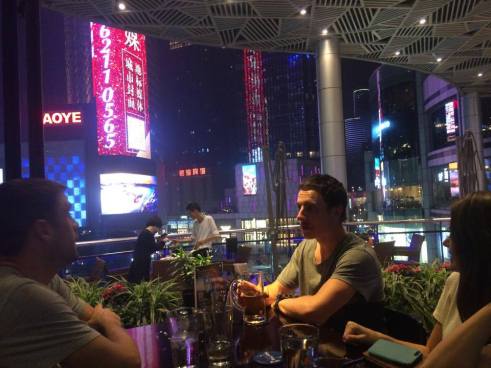 At the pub in central Chongqing

Right now we are 600km south of Wulong in Weng’An. The last race of the series and after some intensive rehab we plan to have Hamish racing with us! He is healing well!

Dates 19th-21st of September. Distances below: