At the end of day 2 we are made to move cities and therefore hotels. A new location with new trails and lakes. It is hard work to pack all gear up, unpack again and prepare for the third day whilst tired but we manage by 9:30PM. A bus running out of diesel and getting stuck due to nil suspension fluid simultaneously didn’t help the late night. 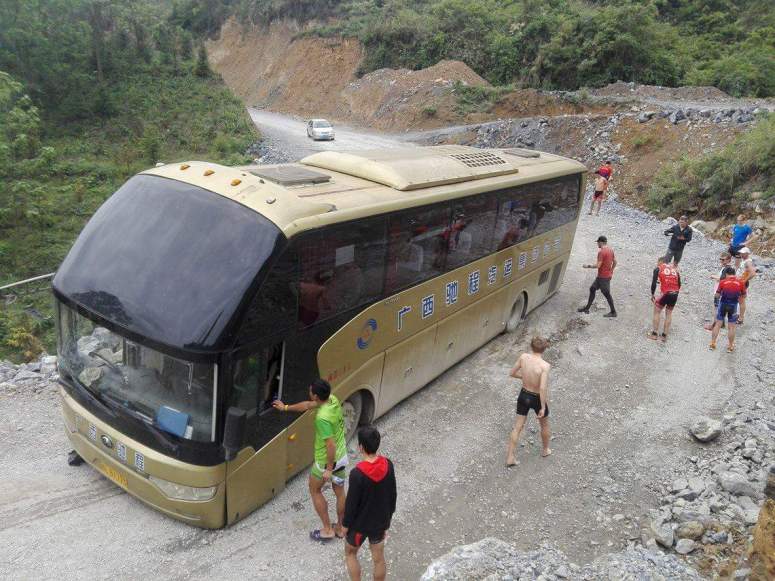 Today we started in 10 sec gaps, a 1 km run down the road and gnarled trail to the lake. Including descending about 50m of bamboo ladder whilst wearing a buoyancy aid and helmet and then immediately jumping into the lake with all gear to swim 1km to a penninsula. We manage to swim well and arrive with Thule and only a 1min behind Purao.

We kayak furiously for just 3 km on the lake to a bay. Climbing out of the boats a few of us are still in bare feet due to stuffing our shoes in our buoyancy aids for the swim so the jog up the transition area was not so nimble.

Beginning a 18km Mountain bike leg we chase after Thule who are just ahead and catch them surprisingly fast. Turns out Martin’s rear derailieur shifter is broken and he cannot change gear, his legs were spinning so fast on the flats he looked like cartoon road runner. We surge hard on a 6 km hill climb and gain a minute or two on them by the transition which is at the top of the hill.

The next stage is a 21km trail run and what a trail it was! It had been recently built and following the cliff sides of the mountain tops, ridge line and high saddles all the way back to the kayaks. It consisted nearly entirely of large, sharp and loose rock. Freshly smashed/carved out out of the hillside. Very technical due to its instability and inconstancy however incredible to experience. So challenging it took us nearly 3 hours 20mins to complete.

Unfortunately Simone had horrible foot pain and the trail made it difficult to go fast. By run end we were in 6th place behind Purao, Thule, a Chinese Team, and two European teams.

Next up a 19km kayak stage. We claimed back two placings to put ourselves in 4th place within 1km and then pushed hard to the end. We claimed the fastest paddle time but it wasn’t enough. A hard 2km uphill run to finish burnt out the bottom of the fuel tank and we still finished 4th place that day.