This was a year of big changes.

I was out to find gains in all the places I knew needed improvement. Finding the perfect boat, perfect goat pass footwear, completely changing my daily diet, my race nutrition strategy, and a huge consistent build up – a 9 month block with only specific and strategic racing events included.

Seemed faultless. Everything fell into place well and I was cycling, kayaking and running much stronger than ever. The new day-to-day diet and practiced training nutrition was a big learning curve (after racing for 6 years on a different plan), I practiced it hundreds of times over the season. Nothing was quite like 8 hours deep into C2C longest day though. I made a few small errors on race day that cost my energy levels to drop for no more than 2 hours on the day (1 hour on paddle, 50mins on last cycle). I know why now but at the time I was convinced I was on top of everything and had it ‘to a T’. 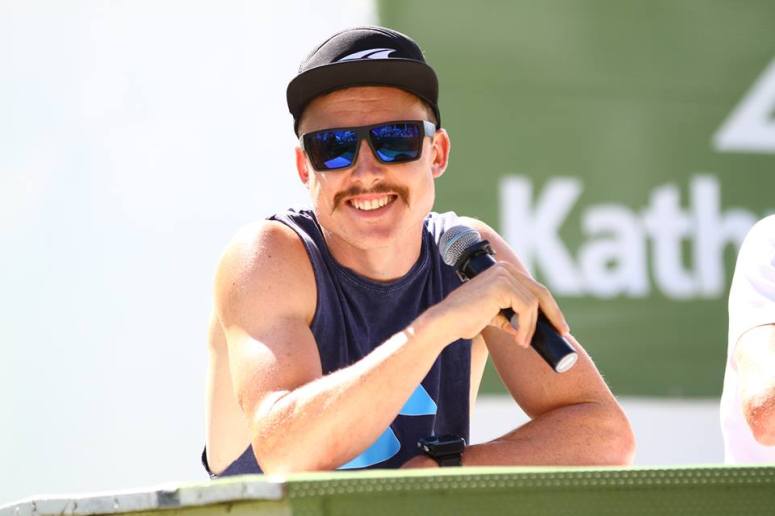 I was more nervous than any other C2C I’d attended. Race morning is normal for nerves, but the whole week before I started thinking too much about how the race day would plan out. Power naps or watching some TV was my best distraction.

As per the forecast, it was drizzly rain at the start line and wet roads everywhere. The run off the beach (2km) was as expected if anything it was slightly slower or/and less surges than previous starts. A flawless transition out of running shoes into bike shoes made sure I was in the lead bunch of athletes on this first bike stage. There were 13 in this group. Dougal Allan, Alex Hunt, James Pretto, Tim Boote, Scott McDonald, Patrick Higgins, Paul Gow, Dean Ford, Bobby Dean, Ryan Kiesanowski, Andrew Sclater, Sam Goodall and myself. 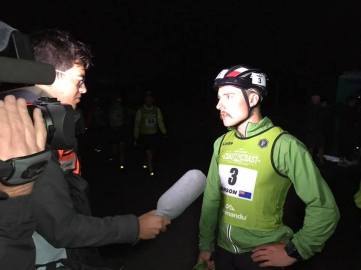 A few interesting surges or prolonged turns on the front made the group less than smooth but everyone rides differently. As the bike group rotated, I took my turn at the front for some work.

We are the leaders of the race, if you don’t want to do any work at the front then my opinion is you shouldn’t be there.

As we approached the end of the stage I ran my transition plan over and over in my head.

Quickly off the bike, all I need to do was put my running shoes on and grab my pack. I use elastic laces on the Altra Lone Peaks, using a shoe horn to help slip into the tight fit. However I fumbled far too much with cold wet hands. And it took about 20 seconds longer than it should have. It might not sound like much, but I need to be ahead, asap. I knew a lot of lines up the river that I was certain others did not know of. 20 seconds is enough time to make following my lines difficult for them.

Dougal and I left the transition together, about 250m back from the lead runners Alex Hunt and Bobby Dean + about 6 others in-between. A steady pace brought us forward into about 4th place by the 2km mark/first river crossing.

Once in the trees I started some of my ‘maneuvers’ to shake others off. My heart rate was higher than I wanted it to be but not outrageous. After another kilometer I was in 3rd place and could easily see the front two zig zaging all over the valley taking slow lines but running fast. A quick look behind me and I was gutted to see a train of 5 or so following me closely. Another surge and after another 2km I look back and now it is just Dougal who is close by and everyone else has fallen back.

This remained the same all the way up until Doreen creek. Dougal was right behind me and we gained time on Alex and Bobby with every move.

Bobby missed a turn-off and now I was in 2nd place with Dougal behind and Bobby somewhere back temporarily. I was getting frustrated with Dougal being on my tail seeing my lines so at Deception Hut, where big boulders surround you again I made another surge. This time it worked and Dougal didn’t match me. I was on my own over Goat Pass and down to the other side. Bobby Dean caught me before the last climb to Dudleys Knob and I let him pass, he took off very quickly.

Once over the Knob and onto the final river flats I see that Bobby is not far ahead and running slower (later to find out he’d cut himself deeply hours ago on a rock). We run together on the 4WD track just 2km from the end and I manage to come in ahead to Klondyke in 2nd place. Just 3 mins back from Alex.

A quick transition then 15km on the bike to Mt White Bridge to start the Kayak stage. I ride strong but conservative wanting to be fresh as possible for the paddle without playing with cramp. Bobby passes me, then Dougal, I can’t believe how fast he has caught me. 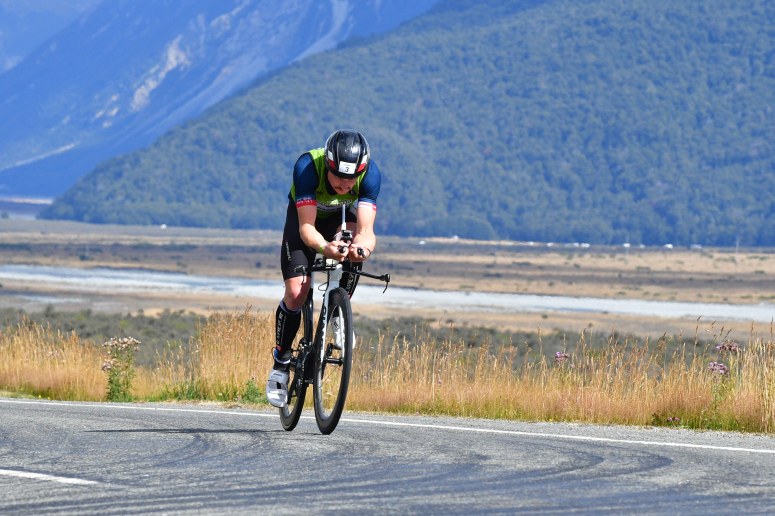 After this short bike, I run down to the kayak and tell Rob my support crew about how I was feeling. I felt great. I was confident I had paced myself well within my limits to this point and was ready to go hard in the boat.

Entering the water 4 mins behind Alex, 2 mins behind Bobby and 30 seconds behind Dougal. 3km into the shallow braids Dougal was about to pass Bobby and I was right behind them both. Right then I saw a channel, a very shallow channel, but it happened to be about the spot I’d be told there was a short cut. I’d never been down it and the river was significantly lower to when it was last used but I went for it any way. Breaking my personal braid reading rules.

Dougal was far too close for comfort and risks needed to be taken. I crunched and bashed my way down for over 15mins. I pop out into the main flow and can see Dougal heading down, I’ve achieved a 100m lead. It was good enough for me. I put some strong effort in from here to try and increase the gap. I didn’t look back for an hour. Then checking to see how I was going I looked back… Dougal is touching my rudder.

It was then I knew this would be much tougher and more interesting paddle than I’d planned.

I pushed harder and by the Esk checkpoint (23km into the stage) we caught the leader – Alex Hunt. I was now leading the race, which is great but the other two were right on my tail. I knew I needed to save ane extra gear for the 2nd half and was holding back a little bit. Through the gorge I went through some big waves hoping to shake them off then at Halfway hut (35km mark) I stepped it up again and this time we lost Alex but Dougal ‘Hung on’ again. (I still need to ask him how he was actually feeling at this point).

At the Red Iron Bridge (42km mark), I’m preparing for another surge to Woodstock and gulping down more food. Dougal starts trying to overtake. He say’s “I’ll take a turn if you like”. The first words I’ve heard him say since the run stage.

My brain struggled to comprehend what was going on. Some think that they benefit from drafting in the river, I don’t mentally see or feel it in moving water. The act of Dougal trying to do good, made me feel like I had accept this kind offer. A noise comes out of my mouth “ohyeh”, a sound mixed with surprise and confusion and acceptance.

Suddenly it felt like the pace increased and I was now behind him, I respond only to find I actually can’t. I felt weak and delirious. Quickly fault finding in my head I decide it is only because I had eaten too much and need to let the stomach settle for a bit and get the blood back to my brain and muscles. 10 mins go by and Dougal is in the distance, 20 mins, 40mins… I still can’t paddle strong. My friends at Woodstock (55km mark) are cheering but I can hear in their voices that they know somethings wrong.

About 10km to go I feel incredibly hungry. I eat some more solids (Ems Power bar) and suddenly feel great. I still feel hungry so I break my personal nutrition rule stuff my face with a whole bar. That amount of solid would normally make me ill but instead I feel super strong and finish the last 8-9 km at a pace faster and stronger than the rest of the stage. I’m happy and angry with myself. 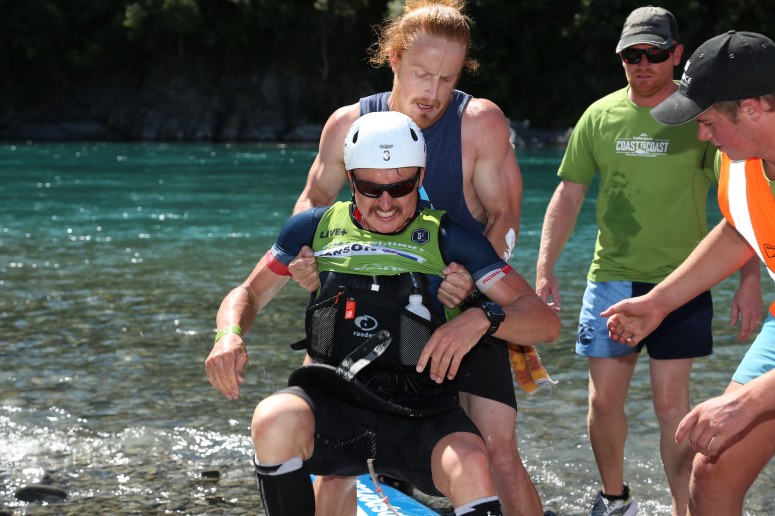 At the bridge I’m out of the boat still feeling great and clear headed. I know that Dougal is a legend on the bike but as the support crew said, anything could happen. 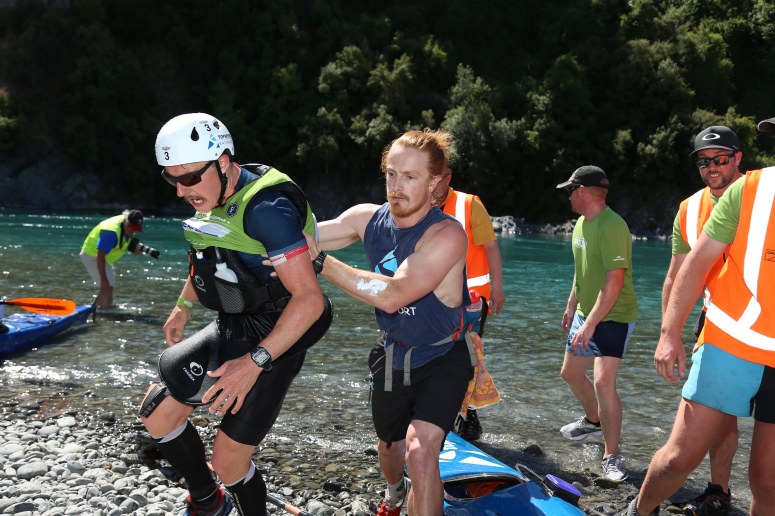 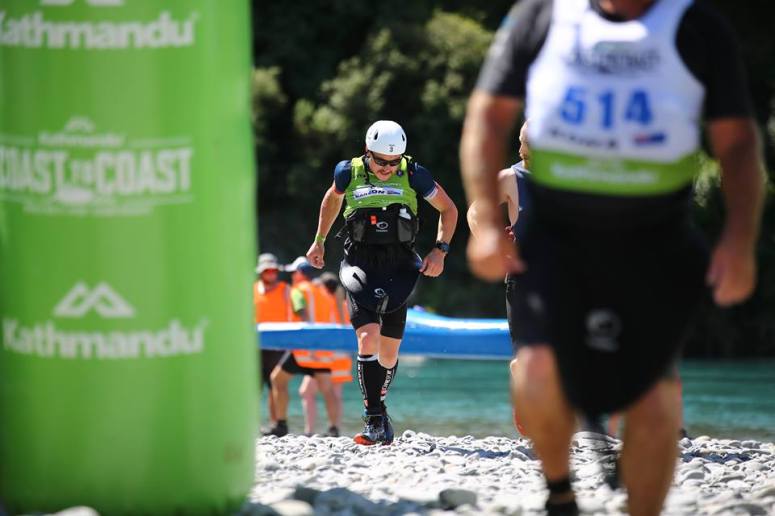 On the bike I’m desperate for a strong ride, just to prove to everyone and myself that I can be faster at this stage. I ride strong for the first 20km and then head wind swings in. I don’t mind a head wind but its very inconsistent, surging in gusts and I have to keep changing up and down gears and cadence. Its very warm and I’m super keen to finish strong so my theory remains to be on top of nutrition.

I ride below my planned power output for nearly 50mins. Near the end of South Eyre Road I run completely out of my two bottles of sports drink. I think I’m going to have to suffer due to this.  5 mins go by and I feel great. I’d probably been drinking far too much. The last 20km I finish strongly often above my planned power output and without any food or drink….

I had no idea how far ahead Dougal was on the ride nor how far behind Alex was.

Up to the New Brighton finish line I begun to accept my achievement of 2nd place and started to self analyse the day. I was stoked with my race knowing that it’s impossible to be perfect (Define perfect??). I was gutted that Dougal had paddled faster than me but that was about it. It really proved that Dougal is still a level above me. He’s able to make his body work at an incredible power output for a long time. I believe I can too but just not quite the same yet.

I was beaten by a better athlete and even the perfect day wouldn’t have saved me (although it would be be great to be closer to him at the end).

Once again, I need more training time in the bank to be the best in this sport. More endurance training and racing, more efficiency, develop technique and skills further and taking action on any mistakes/weaknesses.

Congratulations to Dougal for finally getting the big ‘W’ and also to my good friend Simone Maier (Who I’m proud to say that she rode that last cycle stage faster than me and pretty much everyone else….)

Huge thanks to my friends and family for incredible support this season again. A special mention to my girlfriend Lisa, my Coach Cam Durno and TopSport Crew: Kate Cambie, Len Smyth. This is hardly an individual sport. There are many others but you know who you are and will certainly be thanking you all personally.