Back in August I ran the Hillary Trail in the wild bush just West of Auckland City. It gained a bit of attention because of the time I managed to complete it in. I’m not gunna to lie – I enjoyed the wee moment of popularity . Click on Back Country Runner to see the post. A really tough but scenic challenge. The Hillary Trail Honours Board website has a record of finishers and a really detailed trail guide for anyone that plans to run it (Thanks to Shaun Collins). Click on GPS to see a map of where I went if you’re interested.

Below is the write up I did about it 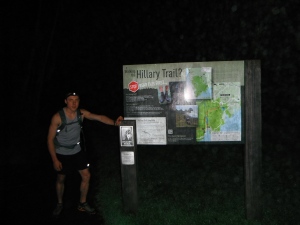 There have been plans for this in the back of my mind for a while now, ever since the idea was planted into my head (inspired by none other than the rumours that some crazy people had run it). I have been trying to find a good time and justifiable excuse to do it where it wouldn’t affect my training or racing too much. A run this far isn’t too relevant to Multisport – which is what my mind and body is focused to at the moment. The great Hillary trail however, succumbed any structure I had to my training schedule and I locked it in a date 2 weeks out because… well just because it would be low tide on a Saturday morning.

I spent the 2 weeks studying over Shaun Collins excellent write up of the track. The only trails I had done prior in the Waitak’s is the Karamatura track to the top and ones way over by Cascade park – so I had little experience with the connecting tracks for the HT.

I carboloaded up a bit prior and early Saturday morning – August 4th, I woke up my keen flat mate to drop me off. A quick stretch of the body in the pitch black and heavy fog, a couple of photos and I was off at 6am.

I started out running as fast as I could navigate with the head light I had, I don’t tend to train in darkness so it would take a bit of getting used to. I then proceed to over-shoot a corner and end up down the bank. Only being a couple of minutes into the whole adventure it was an eye-opener to how little I knew of the trails here and had really no clue what to expect around any coming bends. (Apart from Shaun’s descriptions of course!).

Continuing, slipping and sliding on my feet down Slip track, I spent more time worried I was going to miss the junctions than focusing what I was running on.

I was excited to arrive at Hamilton track, greatly anticipating it since all you hear is how muddy and gnarly it is. 5minutes in I was disappointed, ‘you call this mud?!’ was what I actually said out loud. Sure enough the next corner I was knee deep in the so called monster. It does make for a poor quality tramping track but what an awesome obstacle to add to the day, this track will always be more desirable than running on a road camber around smelly cars. The more technical the better! Not long after Hamilton there was enough sun on the horizon to discard the head light.

With only 3 more stops to check the map and determine my uncertainty for direction at junctions, I made it to the top of Karamatura. Wiping the first lot of decent sweat from the forehead, that track is a climb I just knew I couldn’t (and shouldn’t) run entirely, too many km’s ahead to savour for. I sped pretty quickly down from here slowing only to observe signs at junctions. Down, down, down and onto Kura track. Whoops. No. Map out, correction and back-track my steps.

Omanawanui trail has spectacular views of the distant land and ocean and including an island that I never knew of, the ManukauHarbour is so deep this ‘island’ really was just the Southern headland!

Down into Whatipu I searched and found the tap. While on my knees fumbled with my empty wrappers and filling up the pack bladder, I could feel the conditions of my legs and they felt about right for the distance I’d done. Sure, they were burning – I tend to compare the amount of muscle burn to previous runs to estimate whether or not I’ve been too hard or too easy on them.15mins of mucking around in Whatipu and up Gibbons I go.

I imagine I’m one of many that craves downhill and once on Muir Track I was blitzing it at top speed again. A lazy step, and my toe catches a rock causing the rest of my body to get shredded skin and bent thumb nails upon the rocky trail. Carrying on, I eased out my small limp I’d caused by the time I arrived at the boardwalk. It was flooded with water but running through this cool fluid was so refreshing for my calves.

A little lost following the orange markers in the sand pit but I made it to Karekare. I asked surfers for directions to the Pohutakawa glade walk but they were all clueless so out came the map and instructions again and then again to get onto Comans track.

I reached a bit of a mental low running up MercerBay loop and onto Piha road, I’m not sure why at 35kms in. The sun had suddenly decided to come join me and it instantly became unbearably hot. A fantastic downhill through Kitekite falls and happy Sam was back. Stopping at the track end carpark to top up water, food and text my flatmate that all was good and I was ahead of time.

Jogging along the beach at Piha I could see no sign of a surf lifesavers tower and zig-zaged from the beach to road. I wanted to stay on the beach as much as possible ensuring I didn’t stray from the official Hillary trail. I asked the trusty surfers again but like Karekare they had no clue where anything important was. Map comes out and I make my way out of Piha. I scrubbed my shoes at Kuataika start line while thinking about how it is described as a ‘dreaded’ section before carrying the thoughts into the run. Yes, there was a lot of pushing on the knees but the cool streams splashed on my face and added downhills made it flow well enough and I enjoyed it. The run around LakeWainamu however was not enjoyable, I was now out of the shaded bush in the searing sun light. The lake and stream water was a cruel tease, sooo tempted to jump in and bath in it. I sipped my water stores dry 100m before the Bethells tap. Nothing more demoralising than carrying litres of water you never use so I was happy I’d carried the perfect amount on that section (a little risky though).

Last Pit stop and I was well aware of it. According to my watch I had 1.5hours to do 15km and I’d break the 9hour mark. Easy! So I sped out of Bethells beach on high moral. The steep hill that takes you to the first top on farmland was really hard but I refused to let myself walk. The legs and body overall were showing strong signs that they’d had enough. Steady on, I kept looking at my watch. A slight left through bush and I ended up on the edge of a cliff down to the sea, moving forward I could not find where the track continued, I went back 50 meters, no, there is definitely a distinct track leading here. I spent just under 10mins rummaging through bush before going back down the track 100m to find it diverts a different direction and I was merely at a lookout point. Sh*t I was frustrated with myself… Race pace was on! This boost of energy only lasted about 15mins and the wearing body soon made itself known again. The final hill up to Constable Road damn near killed me, I was on my hands and knees, sweating, panting, wheezing and drooling. Gels had become the most revolting thing on the planet by this stage. Time check at the top. I now had 18mins to do the final 5km. Entirely possible I said to myself, it can be done! I plodded along the road with shorts bursts of speed increase, however it became very apparent that Sam’s entire body was toasted.

I somehow sprinted the final 100m and instantly surrendered my fight against gravity by laying my poor body in the grass.

The day started out early with expectations to be out for a really long time, I planned for between 10 and 12 hours. When my mind became obsessed at the possibility of doing it in under 9hours and I didn’t achieve it I finished the run a little upset and annoyed with myself. But the real aim was to just head home at the end of the day and say I’d done the Hillary trail. Upon short reflection I should obviously be and am proud of my run and time and overall adventure in the Waitakere’s

Eating my first pie in months on the way home, I felt assured that this Saturday was spent productively. May the trail bring many more painfully satisfying memories!